Journey Through the Heart of Central Africa

Central Africa is a land of mystery, with its enchanting landscapes, shimmering colors, and varied nature. It intrigues and seduces visitors at the same time. This vast territory comprises several countries including Gabon, Congo, Cameroon, and Equatorial Guinea, offering a multitude of destinations for travelers to explore.

Depending on your interests and the type of activities you want to do, you can visit the lush rainforests, national parks to witness the diverse wildlife or take a trip to the many museums in the region. From Gabon’s Loango National Park, known for its elephants, gorillas, and chimpanzees, to Cameroon’s Korup National Park, one of Africa’s most biodiverse rainforests and Congo’s Nouabale-Ndoki National Park which is one of the last remaining homes of western lowland gorillas, Central Africa offers an unrivaled selection of natural wonders.

The diverse range of national parks and wildlife in Central Africa, including the Loango National Park in Gabon known for its elephants, gorillas, and chimpanzees, the Korup National Park in Cameroon, one of Africa’s most biodiverse rainforests, and the Nouabale-Ndoki National Park in Congo which is one of the last remaining homes of western lowland gorillas. Upon arrival at the SSG airport, you will be greeted by our representative who will provide airport assistance, including baggage clearance, and then escort you to your private car for transfer to the hotel. After check-in, there will be a brief meeting with the guide to go over details of the upcoming itinerary in Equatorial Guinea. Dinner and overnight stay at the hotel. After breakfast, we will leave the hotel and take a tour of the beautiful city of Malabo. We will visit the cathedral, a gothic-style architecture designed by Luis Saegarra Llairado. Next to the cathedral is the Presidential Palace, with its numerous military installations and personnel. Please note that photography is not allowed in Equatorial Guinea.

On day3, after breakfast, we will leave the hotel and head to the airport for a morning flight to the mainland part of the country, Bata. After a 20-minute flight, we will arrive at Bata airport, where our local guide will transfer you to the hotel for lunch. In the afternoon, we will take a tour of Bata and visit the clock square, the cathedral, the vibrant and colorful market, the mosque, and the central avenues. If time permits, we may go to the seafront in Bomé for a beach walk in the afternoon before returning to the hotel for the night. After breakfast, we depart from Bata and head to the city of Mongomo, which we will reach after a three-hour drive. The road to Mongomo takes us through picturesque habitats and villages along the bank of the road, with long stretches of thick rainforest throughout the journey. Upon arrival, we will transfer to the Akoakam hotel for lunch and then embark on an afternoon sightseeing tour of Mongomo. In the morning, we will visit the city of Oyala, a futuristic city that is soon to become the capital of Equatorial Guinea. Located in the middle of the jungle, Oyala, also known as ‘the city of peace’, is a vast field under heaps of construction work. We will visit some of the gigantic buildings that will serve as government offices, hotels, supermarkets, and others. We will then leave for Bata, which we will reach in the early afternoon after making a quick stop in Anisok. From Bata, we will catch a domestic flight to Malabo where our guide will meet us for the hotel transfer. Today we will leave Equatorial Guinea and fly to Gabon with the next available commercial flight. The major airline linking these two nearby countries is Ceiba International (C2) which operates twice a week, but there may also be other available flights with other regular airlines like Ethiopian Airlines or Kenya Airways. Therefore, the departure time will be adjusted according to the flight schedule at the time of the trip. After breakfast, you can enjoy a thrilling day trip in a motorized pirogue over the lakes of Onague, Ezanga and Evaro, which is great for birdwatching. Alternatively, you can opt to relax by the lakeside and enjoy the serenity of the area. After spending 2 or 3 hours on this boat excursion, we will return to the hotel for lunch and depart for the 4-hour drive back to Libreville, which we will reach in the late afternoon. Dinner and overnight in the hotel. We will depart from the hotel early in the morning and head to the airport to catch a domestic flight to Port Gentil, which typically takes off at 7:30 am and arrives in Port Gentil about 30 minutes later. After arriving in Port Gentil, you will be transferred to a private 4WD vehicle that will take you on a scenic five-hour drive through a dirt and bumpy road, passing through the vast tropical forest and unspoilt beaches, en route to Loango via Liambissi. The journey will take you through some of the most breathtaking landscapes in the region, offering an opportunity to witness the diverse wildlife and nature of the Loango National Park. Today we will have a range of activities to choose from, such as a morning game drive in search of wildlife such as elephants, buffalo, red river hog, sitatunga, bongo, and birdwatching. Alternatively, we can take a boat safari or go on a fishing excursion. The best time for fishing is during the rainy season (September-April) peaking November-February, though fishing can still be rewarding especially around the Lagoon and the river mouth. We will leave Loango early in the morning and travel back to Port Gentil via Liambisi, a journey that takes approximately 4 or 5 hours. Once in Port Gentil, we will drive to the airport to catch a domestic flight to Libreville, which takes around 30 minutes. Upon arrival in Libreville, your guide will pick you up at the airport and take you to your hotel for the rest of the day. We will take a commercial flight to Douala on Tuesdays, Thursdays and Sundays with Afrijet. In the afternoon, we will embark on a tour of Douala, a steamy African port city with many nice places to visit. The city itself is large with a population of more than three million inhabitants and does not have many tourist attractions except for its big market, its handicraft center, and a few other places of interest. As the biggest city in Cameroon, Douala does not attract many leisure tourists but it does receive many foreign business visitors. 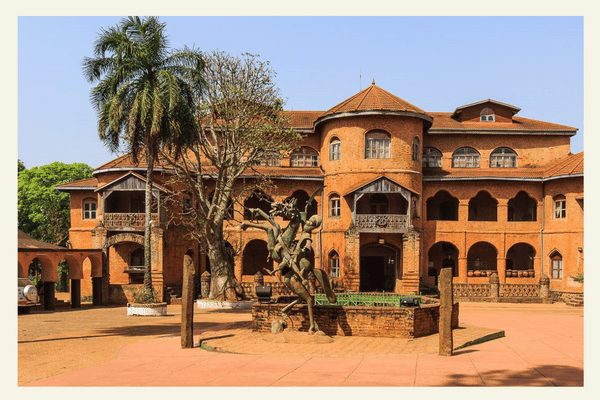 we embark on an excursion to the Western Highlands of Cameroon, making our way to the sultanate of Foumban in the Bamoun Kingdom. The journey offers spectacular views of the varied landscape, including grass fields, mountains, and valleys, as well as tropical plantations of rubber, palm, papaya, pepper, banana, and pineapple. Along the way, we pass through clusters of picturesque villages that are centered around the traditional authority of a powerful chief. 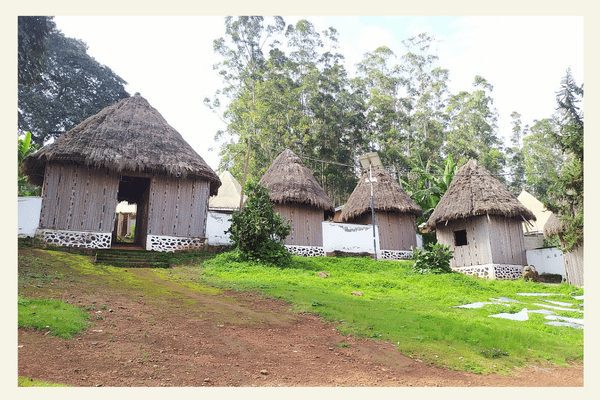 On Day 14, we spend the day exploring the Bamoun land, a powerful kingdom founded by the Tikar emigrants under the leadership of King Nchare. We learn about the most celebrated and prodigious grandson and successor King Njoya, who is remembered as the most emblematic figure for the expansion and prestige of the kingdom. King Njoya was credited with many innovative reforms of the kingdom, including the invention of the Bamoun script, the invention of a mechanical mill for grinding cereals, the Bamoun religion, the reconstruction of a more modern and bigger palace, and the current impressive royal museum.

On Day 15, we leave Petpenoun for Yaoundé, passing through Dschang and Banganté. The scenic drive offers views of mountain landscapes, vast tropical rainforests, and clusters of picturesque villages, as well as countless roadside markets. On weekends, the area is a hub of cultural ceremonies, including funerals, naming ceremonies, circumcision, intronization of new kings, family meetings, and traditional court disputes. Along the way, we may stop at Tonga fruit market, Makenene food market, or the small town of Bafia, before reaching Yaoundé in the late afternoon. Today we delve into the city of Yaoundé and its surrounding areas. A comprehensive city tour of Yaounde includes a visit to the bustling Marché Central, a vibrant market where traders, buyers, visitors, and businesspeople from all walks of life come together to trade, socialize, and experience the daily life of Cameroonians. The market is a chaotic and lively place, filled with the sounds, smells, and heat of daily life, providing a glimpse into the informal economy that many Cameroonians rely on to make a living. We depart early for Douala to catch the 2-hour flight to the island of Sao Tomé. Ceiba International and Afrijet are the main airlines that operate flights between Cameroon and Sao Tomé. Upon arrival, we will be greeted by our representative and promptly transferred to our hotel for the rest of the day.